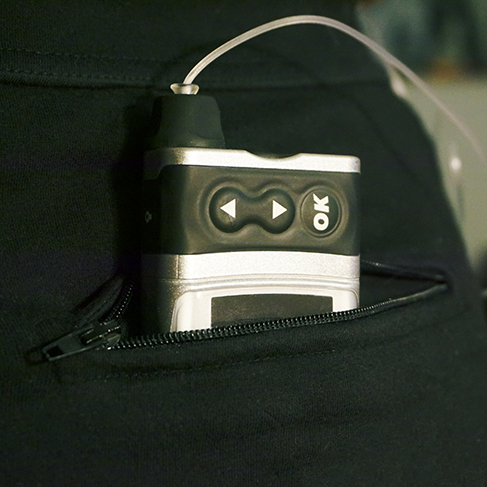 This all started with a day many years ago, when I started wearing a pump. I was all worried about everything, including telling a date I had diabetes. I wondered how this will impact relationships. Will the pump interfere with sex? After all having diabetes was terrible enough.

For the longest time, I struggled with the clip. Most pumps clips to your pants, belt or belt loop. Some people would think it was a pager, but who has a pager these days.

Feeling awkward or angry is common. “Not again, do I have to explain again” “Not Again!!!” “It’s a pump! I have diabetes!! No, there’s more than one type of diabetes!!!” And on and on and on it goes like a merry go round in a person’s head; It can make one feel, “So, frustrated and upset!”

I am not ashamed or worried that people know I have diabetes but would prefer to avoid unwanted conversations with strangers. Afterall, just like talking about your mother, talking about your diabetes is not necessarily great first date conversation. Therefore, I chose to hide my pump. But where? Under an extra long shirt or in our pocket.

Unfortunately, visibility is not the only complication for pump wearers. It will get in the way from time to time, poking and prodding us and usually at the wrong time.

In an attempt to untangle the cord and reduce unnecessary conversations, I’ve tried it all from spandex, belts to homemade contraptions. Nothing seemed to work. I spent many sleepless nights (due to the pump) trying to figure out how to prevent:

At the start of my journey, I said to myself, too bad they don’t make underwear with pockets. Towards the end of my search, I Googled it, and to my surprise, a company called Clever Travel Companion has pocketed underwear, for both men and women.

Being romantic with a pump can be challenging as it can impact intimacy and spontaneity. Pocketed underwear allows the pump to stay out of sight and be taken off with the underwear in one step, just disconnect the cannulate.

I found one pair that had two front pockets which allow for pump rotation and even without that they are the most comfortable pair of boxer briefs I have ever owned. The best part is you practically forget you have a pump on. It even gives you the freedom to move around during sleep.

Use “DiabeticTalks” discount code at checkout to receive 10% off!

Eliot LeBow, LCSW, CDE, is a diabetes-focused psychotherapist. His private practice, located in New York City and is also available via Skype. LeBow, who has been living with type 1 diabetes since 1977, treats the many diverse cognitive, behavioral, and emotional needs of people living with diabetes.

Medical Disclaimer:
All the advice included in this blog is therapeutic in nature and should not be considered medical advice. Before making any changes to your diabetes maintenance program, please consult with your primary physician or endocrinologist.

Eliot LeBow, LCSW, CDE, is a diabetes-focused psychotherapist, diabetes-coach, presenter, and writer. His private practice, located in New York City and is also available via Skype. LeBow, who has been living with type 1 diabetes since 1977, treats the many diverse cognitive, behavioral, and emotional needs of people living with type 1 and type 2 diabetes. Diabetes-Focused Psychotherapy takes a holistic approach combining traditional talk therapy with diabetes education and management help. It addresses both the physical and emotional aspects of living life with diabetes while still addressing other non-diabetes related life problems to create a unique holistic approach to helping people with diabetes thrive. View all posts by Eliot LeBow LCSW, CDE